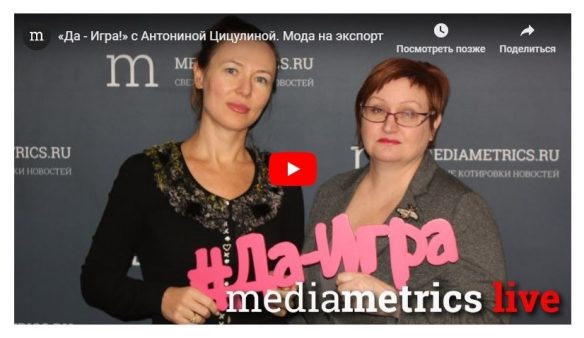 
On February 13th Anastasia Vasilkova, one of the foundes and development director of TM Choupette, took part in  broadcast "DA-IGRA!" on Mediametriks channel with Antonina Tsitsulina.

Antonina Tsitsulina - the president of enterprises of children's goods Association and the founder of  "Gold Bear Cub" award conducted an interview with Anastasia in live dialogue format in  broadcast called "DA-IGRA!". This time subject was "The fashion for export". In the course of the interview such subjects as following were brought up: export of kidswear from Russia, is it easy to make them in our country and what support is vital to the enterprises of a light manufacturing of kidswear.

You can check the broadcast by clicking the link: https://www.youtube.com/watch?v=d7zBEphTBtE