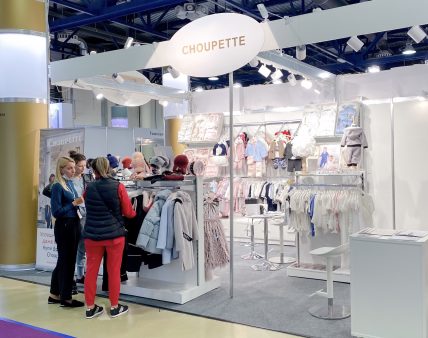 
The Russian brand of fashionable children's clothing Choupette traditionally took part in one of the largest events - the 26th international exhibition CJF “Children's and Youth Fashion. Clothes for future mothers ".

From September 21 to September 24, more than 200 brands from 11 countries demonstrated novelties in the field of children's goods. According to the overwhelming majority of Russian and foreign exhibitors, this is the most popular platform for new products and effective business communication presentation in the children's fashion industry.

Choupette presented its unique products, which have been captivating customers all over the world for more than 14 years: envelopes and discharge sets, overalls-transformers, outerwear, as well as fashion collections and school uniform.

According to Anastasia Vasilkova, development director of TM Choupette, the brand was greeted very warmly. Many partners noted that despite the crisis conditions, Choupette continued to follow its standards: release of seasonal collections, shippings were on time and developed new categories.

“We got 30-40 new contacts a day, both for wholesale purchases and for the franchise program,”- says TM Choupette Development Director. “We also felt that there was a global change of participants: many new companies appeared and old manufacturers and brands left”.

This year, Choupette is successfully expanding into new markets: this summer, the brand opened a monostore in New Delhi, and very soon Choupette store will appear in Kuwait at the "Al Kout Mall". It will be the largest retail outlet of the brand - 130 square meters.