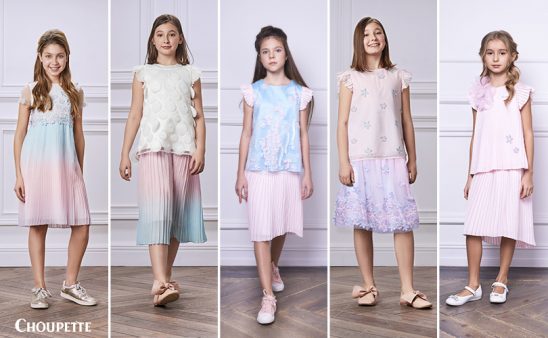 The kidswear brand Choupette released a special capsule for the Middle East for the first time!

"This spring-summer season collection of elegant dresses was created with small adjustment in design features: longer skirts, the closed shoulders, lack of transparent elements. At the same time the style and, of course, quality of Choupette remains. So far it is very limited line, but we have demand for it, in Russia and abroad, - comments Anastasiya Vasilkova , the development director of TM Choupette. - Initially we planned it for the Middle East, but as a result made collection slightly bigger to test also in our country. This collection is not presented in all Choupette stores".

Let's remind, last spring Choupette opened a signature corner in Dubai. It took place in Dubai Mall. The corner is a part of multibrand shop of fashionable clothes for children. In the closest future brand is planning to open a flagman boutique in the UAE .

It should be noted that the direction representing "decent fashion" (Modest Fashion) promptly develops today around the world. This trend is winning the increasing audience, becoming beyond religious, cultural, public or political trends. Not only small designers, but also global brands are releasing capsule collections, and large retailers are opening themed sections answering to inquiries modest fashion consumers.